VANESSA BRYANT THANKS THE WNBA FOR HONORING GIANNA BRYANT & TEAMMATES 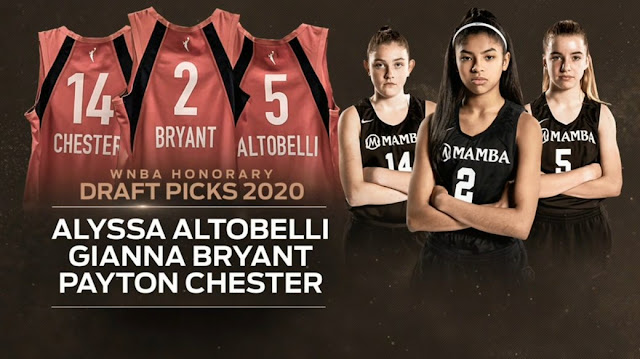 In January, all three girls tragically loss their lives in a helicopter crash, which also killed NBA star Kobe Bryant and five others.

Gianna and her dad Kobe were both advocates for women's basketball, unbeknownst becoming WNBA league ambassadors.

The three girls were among nine killed in a January helicopter crash that also claimed the life of Kobe Bryant. pic.twitter.com/8a8PhIXwRV
— SportsCenter (@SportsCenter) April 17, 2020

In announcing the picks, the families of the three players shared video messages, including Vanessa Bryant:

"Thank you so much for honoring my Gigi and selecting her to be an honorary draft pick this year. It would've been a dream come true for her. She worked tirelessly every single day. She wanted to be one of the greatest athletes of all time—just like her daddy. Thank you. Thank you for honoring my little girl. "Kobe and Gigi loved the WNBA. I want to congratulate all of this year's draft picks. Congratulations, work hard, never settle, use that Mamba mentality."

Vanessa Bryant thanks the WNBA for honoring Gigi, and shares some wisdom for the 2020 draft class. pic.twitter.com/CwvyxqG0fi
— ESPN (@espn) April 17, 2020